Is my husband/wife using heroin? 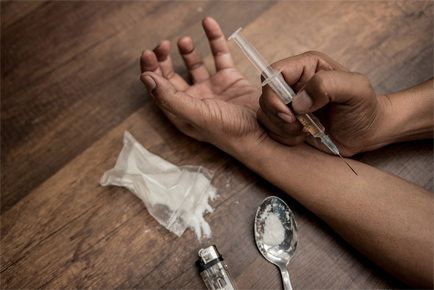 Is my husband/wife using heroin?

Stress and daily life challenges can get even the best of us. And sometimes, coping with problems in life can take people down a very dark path; heroin abuse is one of them.

Over 9.2 million people worldwide use heroin. In 2008, one in every five drug-related deaths across Europe was because of opiates – mainly heroin.

If there is one thing the figure above tells us, it is substance abuse, especially heroin, should not be taken lightly.

Spouses are one of the first people to realize something is wrong with their partner and eventually recognize the signs of an addiction. If you think your husband or your wife could be using heroin, it is imperative to seek substance abuse treatment immediately. But before that, you need to educate yourself on how heroin addiction works.

Heroin is an opiate, derived from the opium poppy plant. After the opium is extracted it is modified to make heroin; a highly addictive and illegal substance.

The appearance and form of heroin may vary depending on how it is consumed. It could be in a white or brown powder form, as tar heroin which is a black sticky substance, or as a black solid. Heroin may be injected, snorted, or smoked.

No matter how heroin is used, it does not lose its potency and is still considered as highly addictive.

Why is it used?

The negative effects and dangers of heroin use are known widely. At this point, you must be wondering, “Why would my husband/wife resort to it then?”

People use heroin because of immediate pleasurable effects. It gives the user a “rush” commonly described as a sudden joy and happiness. Users may also experience a warm, sedated feeling with heaviness in arms and legs. This sense of wellbeing is also accompanied by confidence.

These immediate pleasures give people a much-needed respite from worries and constant stress. More often than not, there are underlying or co-occurring mental issues that accompany heroin abuse. In such cases, a dual diagnosis is made.

To conclusively determine whether your spouse is using this illegal opiate and addicted to it, a consultation at a substance abuse center is needed. However, you can look out for the most common short term and long term signs and symptoms that accompany heroin use.

Apart from the sudden surge of euphoria and pleasure, there are other signs of a short-term heroin use:

Over an extended heroin usage, following signs and symptoms start to manifest:

Heroin works by binding to opiate receptors in the body. Once the molecules bind to these receptors, the user experiences an altered perception of pain and reward. Over time with continued usage, three major changes start to occur.

The first is a tolerance to the substance abused. Tolerant drug users need higher doses of the same drug to feel the same effects as before. The second major change is a dependency.

The body of a person dependant on heroin has adapted its functioning to for heroin use. In order to function normally, the body now needs heroin. Once a dependant person quits heroin, he will feel a series of withdrawal symptoms, indicating dependence.

The third and last major change is an addiction. Addiction rewires the user’s brain, such as altering the reward system. The hallmark of an addict is resorting to extreme methods – usually criminal and violent – to obtain the drug.

Heroin is often mixed with other substances such as sugar, starch, and powdered milk. When directly injected into the bloodstream, these substances can clog blood vessels, and affect major organs like liver and kidneys.

Many heroin users often share their injection which increases the risk of HIV.

Before Addiction treatment for heroin use starts, the patient has to go through a drug detox at the drug detox center. A medical detox will be performed to flush any residual drug from the body and provide relief from the uncomfortable withdrawal symptoms through medication.

Once your spouse is clean from the drug, they will be enrolled in a drug rehab program. Drug rehab centers have a staff of skilled therapists who oversee all rehab treatments.

Heroin addiction is treated in the following ways.

Medication management replaces heroin with a less harmful drug such as Methadone, Buprenorphine, and Naltrexone. These drugs target the same receptors as heroin but are safer, do not have the same side effects and are prescribed by a doctor. Medication therapy has also been known to increase the retention and recovery rate of heroin addicts.

Behavioral therapy, when paired with medication therapy, has been known to greatly improve chances of recovery.

Find the right rehab for your spouse

A comfortable, safe, and private environment with the best facilities can make a great deal of difference in your loved one’s journey to recovery. Join us at Affinity Recovery, our luxury heroin rehab, and let our dedicated team of staff assist you and your loved one. Give us a call and we’ll schedule an appointment for you right away.